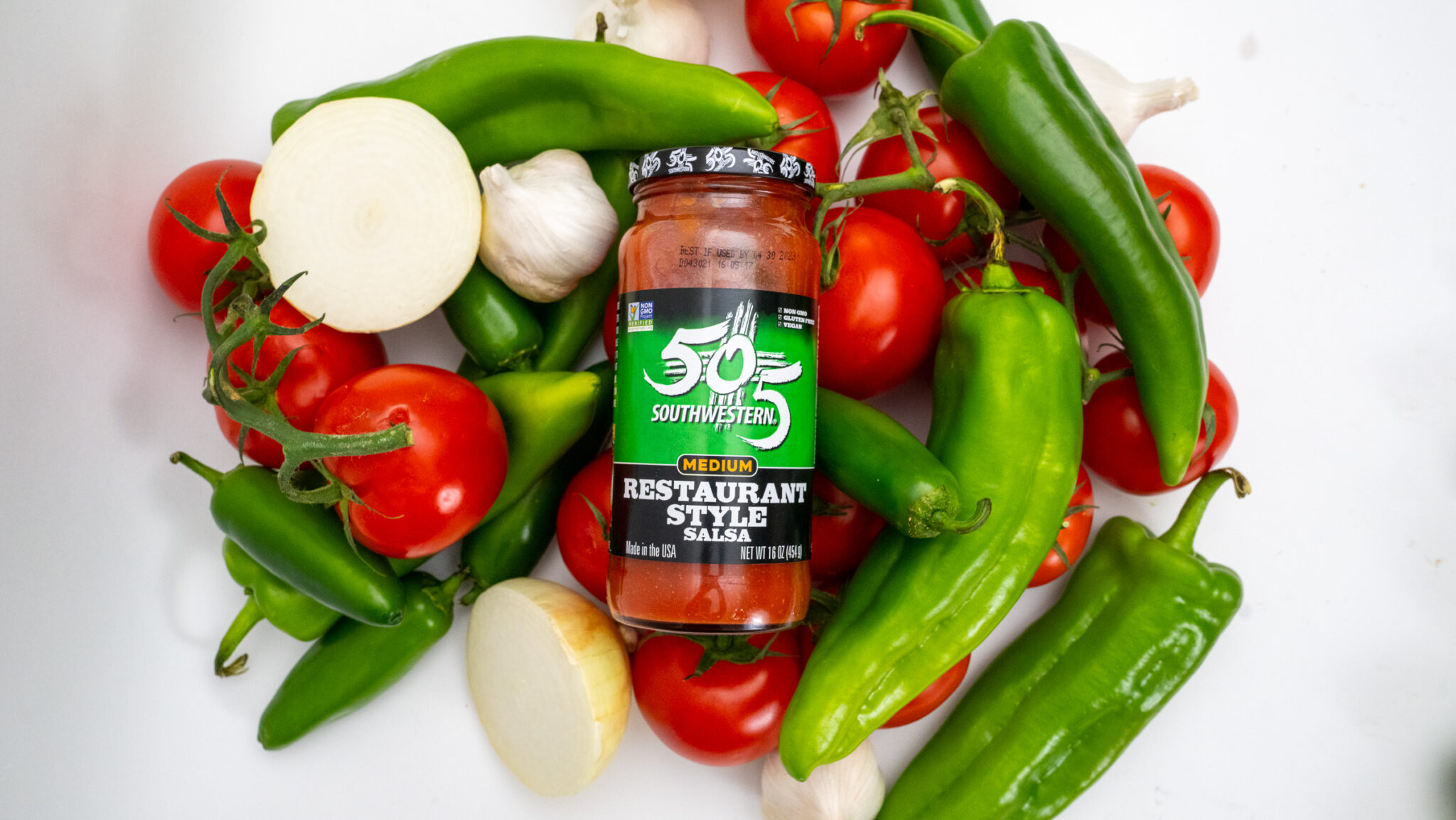 505 Southwestern®, (505SW™) the country’s leading Hatch Valley flamed roasted green chile brand, based in Greenwood Village, celebrates 25 Years of Flavor this year and is kicking off its anniversary party with a nationwide recipe contest, a charitable donation program, and a social media giveaway on May 5th (otherwise known as 5-05 Day). Twenty-five years ago, 505SW jarred its first batch of premium Flame Roasted Hatch Valley Green Chile to share with the world using three simple ingredients and has been elevating everyday recipes ever since. Today the brand offers more than 20 sauces and salsas all made with the world’s best green chile. 505SW will celebrate its 25th anniversary all year long culminating with a VIP anniversary party in New Mexico with company founder Roy Solomon during Hatch Valley green chile harvest season.

“For 25 years 505SW has been committed to creating the highest quality products using the best and most simple ingredients from the Hatch Valley. Now we want to celebrate with the people who have made our success possible,” said Rob Holland, Executive Chairman of 505SW. “We will be demonstrating our commitment to our fans and communities with a recipe contest featuring incredible prizes, other giveaways, special offers, and charitable giving all year long.”

25 Years of 505 Southwestern History In 1997, local restaurateur Roy Solomon decided to jar his famous green chile and began selling it to his loyal patrons from the back of his restaurant. He quickly realized the potential of 505SW Flame Roasted Green Chile and made the decision to drive to Denver to officially launch his brand. Now 25 years later, the company is thriving, having grown at an average of 20+% annually for 10 consecutive years. The company’s longstanding commitment to New Mexico represents thousands of jobs and millions of dollars of economic impact to the area. The “505” name reflects where it is from—505 is the area code of Albuquerque, New Mexico.

25 Years of Flavor Recipe Contest To celebrate its deep New Mexican roots, 505 Southwestern is asking people to submit their most delicious recipes using 505SW products for a chance to win a variety of prizes. Entrants can submit a new, cherished or simply delicious recipe featuring any of 505’s products including green chile, salsas, or sauces for the chance to win $2,500 cash and a trip to Albuquerque in September for the 505SW VIP anniversary party. To enter, visit the official 25 Years of Flavor webpage at 505southwestern.com/25years.  This recipe contest runs May 5th- June 12th. The winners will be announced on or around July 15th. The winning recipe(s) will be full of bold flavor, creativity, and look and sound delicious! (Not necessarily pretty.) Must include photo and/or video of recipe including full recipe outline and all ingredients. Bonus points will be awarded for sharing submissions on social media (must tag @505southwestern and use #25YearsofFlavor). Open to anyone 18+ nationwide, including home chefs, food bloggers, restaurants, celebrity chefs, and any/all 505 fans who love flavorful food!To enter and for the official judging criteria and rules, head to 505southwestern.com/25years

505 Day Giveaway While May 5th is traditionally celebrated as Cinco de Mayo, 505 Southwestern has celebrated its namesake day as 5-05 Day for the past two years and will double down this year for the company’s anniversary.   “Celebrated annually on May 5th, 5-05 Day is a celebration of our love for all things New Mexico, from the landscape and people to the culture and cuisine. 505SW is proud to be from the Land of Enchantment, to support the family-owned farms that grow the finest green chile, and to collaborate with other New Mexican businesses,” said Holland.
This year 505 is partnering with New Mexico-based brands Taos Bakes, New Mexico Piñon Coffee, Brotique 505, Hanselmann Pottery and Old Barrel Tea Company to give one lucky follower a prize pack as enchanting as those New Mexico landscapes that includes a 505SW gift pack featuring products and swag, a hand-thrown pour over gift set, Zia Dad Hats, Pinon Coffee’s Greatest Hits gift box, and more! Giveaway opens May 5th, 2022 and submissions will be through Instagram.

25 Years of Flavor Charitable Contribution For every online order made between April 18 and October 10 (that’s 25 weeks!), 505 Southwestern will donate a portion of sales to the 505 Southwestern®-New Mexico True Scholars program–a scholarship to support a future generation of farmers–with a goal of $25,000. 505SW launched the scholarship program in 2017 to recognize the passion and commitment of the recipient to pursue higher education and make a positive impact on the agriculture industry in New Mexico. One recipient for the $5,000 scholarship is selected from a pool of applicants annually based on their merit, financial need, and commitment to agriculture.  “505 Southwestern believes in the ongoing support of the local agricultural industry in New Mexico. Our business relies on its unique green chile and this allows us to help foster the next generation of farmers and entrepreneurs in the state.”

About 505 Southwestern®505 Southwestern®, together with its family of brands and affiliates, is one of the leading premium green chile-based products companies in the country. The brand’s core lineup of shelf stable, premium New Mexico salsas, sauces, and flame roasted green chile is the fastest growing of its kind in the USA and is currently sold from London to Los Angeles. The brand’s portfolio also includes queso as well as frozen stews and diced green chile. 505 Southwestern® has a commitment to giving back and formed the 505 Southwestern®-New Mexico True Scholars program in conjunction with the State of New Mexico to support a future generation of farmers through its scholarship program. The company is based near Denver with its manufacturing headquarters in New Mexico.