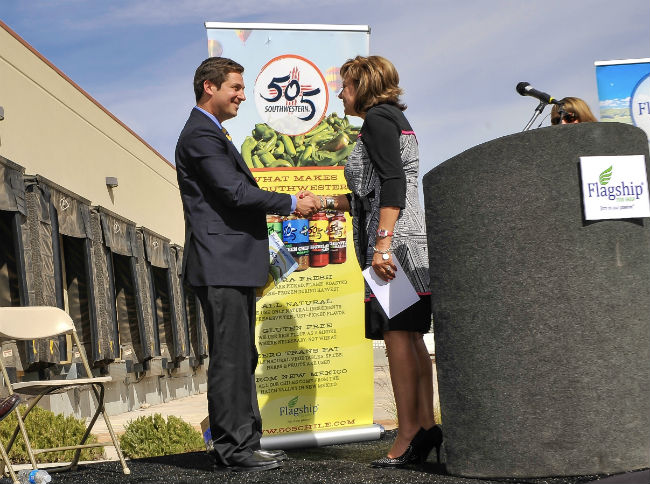 After working in banking, Holland shifted career gears. "In 2005, I ventured out into something more entrepreneurial and acquired with some partners a food business in L.A.," he says. "I sort of fell in love. It was hard work, but it was fun. I got to learn how the food industry really works."

That first deal was a turnaround, followed by several more acquisitions, including TJ Farms of Boise, Idaho.

Holland soon found a brand to build his nascent business around: 505 Southwestern, an Albuquerque-based salsa and green chile sauce manufacturer that had made serious inroads in Denver.  Flagship Food Group bought 505 from founder Roy Solomon in 2008.

Holland says Flagship has bought and sold several brands over the years and the portfolio continues to evolve. The company has averaged two acquisitions a year for a decade running. "At its core, Flagship is a mini-conglomerate," he says. "We operate in the branded space, we operate in private label, we operate in food logistics."

When Flagship acquired 505, he adds, it was "a very small regional brand." It has since extended its reach beyond Colorado and New Mexico and is now available in all 50 states and the U.K. (It's even available at Wembley Stadium in London.) Holland says sales have increased by a factor of 15 since 2008.

"Green chile peppers as a condiment, as an ingredient have hit the mainstream," he notes. "You're seeing green chile burgers on the menu at big chains across the country. . . . We're sort of playing right into that. 505 is the number-one premium green chile brand in the country by market share."

He continues, "It's growing like a weed. The brand has grown by double digits for 12 consecutive years. That is really hard to do in any industry, but particularly the branded food space."

Keeping up with 505's growth has required a $30 million investment in manufacturing capacity in Albuquerque. Manufacturing salsa, burritos, and other products, the 140,000-square-foot facility there is Flagship's largest, with about 200 employees, an R&D lab, and a 9,000-pallet warehouse.

The plant offers an apt distribution location for the 505 brand. "Colorado remains our number-one market by dollar volume," says Holland. 505's success "played no small part in our decision to move our headquarters to Denver from Santa Monica in 2015."

But the Land of Enchantment is still core to the brand. "New Mexico is known for its cuisine," says Holland, noting that 505 is named for Albuquerque's area code.

While Colorado Governor Jared Polis has boosted the Centennial State's chile farmers, Holland says 505 exclusively uses Hatch chiles from New Mexico in its products. "We're tried to stay out of that fray," he explains. "The fact is that New Mexico has created enormous infrastructure around growing green chiles. It's one of their marquee state industries." The acreage under cultivation in New Mexico in recent years has been in the neighborhood of 8,000 acres, versus less than 1,000 in Colorado.

Green chile aside, Flagship utilizes "a global supply chain," says Holland. The company has leveraged that experience to offer private label manufacturing and logistics services to outside brands. Flagship has manufacturing and distribution facilities in Indianapolis, Minneapolis, and Denver, and maintains offices in Boise, San Francisco, and Los Angeles. The Greenwood Village headquarters is home to about 30 employees.

The company recently "vertically integrated on the distribution side," says Holland. That move has catalyzed the Flagship Logistics Group, which offers warehousing and distribution to a number of global food companies, says Holland, by leveraging a "database of carriers, suppliers, and vendors" used by in-house brands. "We have taken that valuable asset to the outside world. Not to name names, but we do the supply chain for a number of Fortune 500 food companies that decided we could do a better job with their food distribution and warehousing than they could do in-house."

Challenges: "Finding a good workforce is a challenge," says Holland. "That's difficult in this labor environment."

Marketing for 505 presents another issue: Green chile remains relatively unknown outside of the Southwest. "We here in Colorado know how great green chiles are. We know we can put green chiles on a burger or a pizza or a hot dog or basically anything, and it tastes great. One of the challenges is to get folks in Chicago or New York or Florida or California to have the same passion for green chile."

Holland says Flagship has established partnerships with the pro sports teams (including the Denver Broncos, Arizona Diamondbacks, and Jacksonville Jaguars),  and ski resorts (including Steamboat and Winter Park) to rev up the hype.

Opportunities: New products and brands. "We are in innovation mode in terms of new products," says Holland, touting an upcoming line of new 505 salsas. "We're in constant dialogue with companies to acquire."

He says he also sees growth potential in existing brands, including 505 and Lilly B's, as well as private-label manufacturing and logistics.

While 505 is now available at retailers in the U.K., Holland says the focus remains on the U.S. for the time being. "There's so much opportunity in our backyard that we don't chase too many things across the globe. We'll get there. I think that's going to be a neat chapter of growth in the coming years, but I've got to get the folks in Jacksonville, Florida, to eat green chile first."

He sees demand for green chile continuing to grow. "We're in the sweet spot, 100 percent," says Holland, noting that 505's "clean ingredient decks" align with market trends. "You look at the back of our 505 Green Chile and there are three simple ingredients: green chiles, lime juice, garlic salt. Done. There's nothing you can't pronounce, there's nothing strange, there are no preservatives."

Holland also points to "the flavor profile and, candidly, the heat level. Millennials want heat. We all want heat."

Needs: "We're well-capitalized," says Holland. "We're in a place where we want to start marketing more and more broadly. The need we have is to figure out how we deploy that capital in an effective way."